if japan can …why can’t we?

a TV program aired by NBC in 1980 started a quality revolution in the US.

it takes more than 20 years (!) for Americans to understand the secret of Japan’s greatness in manufacturing and products is actually coming from some American thinkers, most notably W. Edwards Deming and Joseph Juran.

today,  61 years after Deming’s teaching in summer 1950 for Japan engineers and managers, the question is does Deming & Juran teaching still relevant to today’s business?

my answer is YES.

their teaching on customer focus, appreciation of a system, appreciation of people, understanding of variations and its root causes, the principle of continuous improvement, the focus on long term over short term gain, in fact more relevant today than it was.

it is so basic, eventhough for many conventional thinking it looks counter-intuitive

it is not just about lean or six sigma or TQM or QCCC or ISO or others….it is about the passion to deliver the best product and services to the customers. it is about growth and sustainability

for my Indonesian fellows, please allow me to ask this question

if Japan can…why can’t we?

fooled by average #2: “hey boss, we have increased productivity averagely by 50%!”

Have you ever heard anyone, your team member, or colleague, reported that he increased an important result AVERAGELY by a significant number, say 50% or more?

That could mislead you.

Here I show an example in below graph and in an imaginary situation. 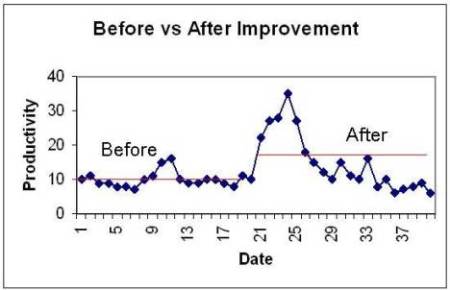 Imagine you were a leader of an important team to improve productivity. You have prepared your team and execute many actions. You tracked the performance “before” vs. “after” the improvement. Then you have the graph presented to your boss and all the executives in your company.

You showed them “Before” improvement, your productivity was AVERAGELY 10 pcs/day. “After” improvement the AVERAGE became 15 pcs/day. It is a 50% improvement! (refer to the graph).

You’re so excited to report this and your boss could not hide his happiness and you became the star of the month. Everybody’s happy and you got the award. But something looks wrong.

Now, you look at the graph closely, you know something is wrong with the 50% improvement (in this example, it’s easy to spot with naked eyes…in real world with thousands of data points, the misleading conclusion could not easily be caught).

In a nut shell, for making a representation of a set of data, at least you have to review 2 other things in addition to average (or median): the shape of distribution, and the variance of the distribution.

I deliberately put this at the end:

there are several statistical tool can help us to test whether two set of data (or more) are different: could be t-test (for a pair of distribution) or analysis of variance (anova) for multiple set of data

Some positions for professionals in process improvement

Here is an opening from a US-based consulting for jobs in Indonesia. Interested applicants please send CV to VRI.Indonesia@gmail.com

Desirable But Not Required Skills and Attributes:

Location: Work to be performed in various locations throughout Indonesia.

Contractual Obligations: Agree to work as a subcontractor to Variance Reduction International, Inc. (VRI) for at least 2 weeks a month for 12 months, contract extensions will be awarded based on performance.  A default clause will be in effect for poor performance allowing VRI to terminate the contract.