fooled by average #3: and 2 simple tools to avoid it

previously I posted two examples of the common misleading use of AVERAGE.

now, I will show my favorite tools (well, it’s graph) to avoid you are fooled by somebody’s using average.

In fact these two graphs are my favorite graphs (other than the pareto diagram): run chart and box plot.

Here is an imaginary story on how you can use those two graphs.

Imagine you are a sales manager, and you have 3 sales officers report to you: Ed, Jon, Lisa.  You have targeted them to sell at least $16/week.  You told them will send the best seller to Bvlgari hotel in Bali for a week of vacation with their family.

Now, by the end of the year, each of them coming to you and reported they have achieved the target. Each of them send you the full 52 weeks actual sales result (in a spreadsheet) and as they said, each of them in average has sold $16/week. Who deserve the nights at Bvlgari hotel?

Fortunately you are smarter now; you can’t be fooled by the average anymore. Not you.

First, you make a simple run chart. I.e. a simple graph showing the sales of each person over the 52 weeks. 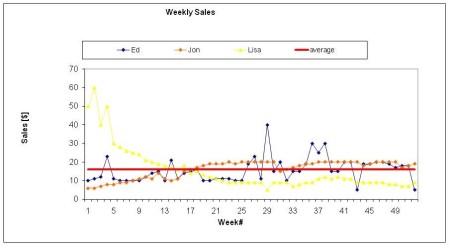 Looking at run chart, you can see stability and trend. You can see, if you are using average, all of them has the same average at $16 (see the red bold line).

But this run chart tell you that Ed’s performance is very unstable. Lisa has an exceptional early performance, but she is getting worse and worse over time. Jon has show consistent performance and also he is getting better lately.

Next, to compare their result side by side, you make a box plot. This is a simple chart representing the distribution of each person’s performance. 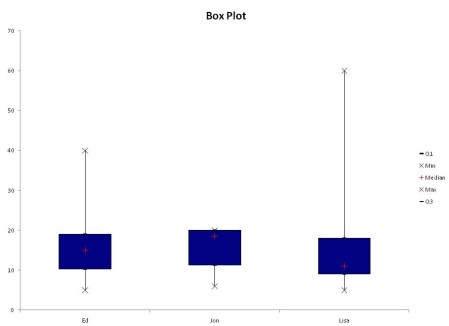 This graph is strengthen your analysis on their performance.

Now you are about to pick up the phone, to tell the great news to the best sales of the year. Bulgari hotel, Bali…not bad at all…

Readers, do you know which one is the best sales based on the above two graphs?